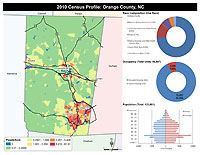 The Census Bureau collects American Community Survey data from a sample of the population in the United States and Puerto Rico-rather than from the whole population. All ACS data are survey estimates. To help you interpret the reliability of the estimate, the Census Bureau publishes a margin of error (MOE) for every ACS estimate.

American Community Survey 1-year and 5-year estimates are period estimates, which means they represent the characteristics of the population and housing over a specific data collection period. Data are combined to produce 12 months or 60 months of data. These are called 1-year 5-year data.

The methodology used to prepare the population projections below were approved by the Board of County Commissioners as part of the Orange County 2030 Comprehensive Plan.