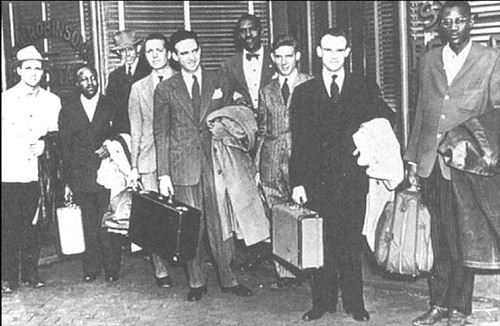 Four men arrested in Chapel Hill and convicted in 1947 after challenging Jim Crow era segregation laws had their names cleared June 17, 2022, in a special ceremony in Orange County Superior Court.

As the riders attempted to board a bus to continue the journey to Greensboro, several were removed by force and were attacked by angry cab drivers. Four of the riders--Andrew Johnson, James Felmet, Bayard Rustin, and Igal Roodenko--were arrested and charged with disorderly conduct for refusing to move from the front of the bus.

“Imagine the courage it took to quietly sit together at the front of the bus while people outside taunted them, ridiculed them, threatened them with violence," said Woodrena Baker-Harrell, the public defender for Orange-Chatham counties. "They were probably mortified, scared about what was going to happen to them. Yet through that agony, they continued to sit there quietly because these four men believed in what they were doing. We, as members of this community, should strive to have the courage displayed by these men.”

Following a May 1947 trial in Orange County, the four men were convicted and sentenced to 30 days on the chain gang. The convictions were later upheld by Orange County Superior Court and then the N.C. Supreme Court.

The idea was conceived a year earlier during ceremonies honoring the 60th anniversary of the 1961 Freedom Rides. Renee Price, chair of the Orange County Board of Commissioners, learned that the charges against the men arrested in Chapel Hill, in what many Civil Rights historians consider the first Freedom Ride, had never been dropped. She reached out to Orange County Superior Court Judge Allen Baddour, whose office researched the incident and legal cases.

Baddour decided that a Motion for Appropriate Relief would be the legal vehicle to drop the charges because the men were convicted under state statutes that violated the Constitution. The statutes (N.C.G.S. 60-135 and 60-136) weren't repealed until 1963.

"They were testing the Supreme Court ruling (Morgan v. State of Virginia), which at that time was the first step that allowed desegregated interstate bussing," said Baddour. "These men were convicted in Superior Court in this room on March 15, 1948."

The ceremony was planned for June 17 to coincide with the Juneteenth holiday weekend.

"They were arrested and convicted for violating lawas that were in fact a violation to humanity, a violation to human dignity and a violation to freedom and justice for all," said Price, who organized the event. "Seventy-five years later we are heralding the truth that the participants in the Journey of Reconciliation were right."

"The 1947 Journey of Reconciliation was about … speaking truth to power and confronting injustice nonviolently," said Walter Naegle, Bayard Rustin's partner who joined the proceedings from his home in Pennsylvania via Zoom. “They were not fighting for their own group, but for all of us. These student riders sought to have our nation live up to its Democratic principles and force it to live up to its Constitutional protections. Their faith and their consciences compelled them to act.”

Amy Zowniriw, Roodenko’s niece, didn't learn of it until she was 11 or 12, almost 20 years later, and had a difficult time understanding it.

"I saw my uncle as the epitome of a moral and righteous citizen, yet he was put in jail for sitting next to his dear friend, Bayard Rustin, on a bus," she said. "He devoted his life to changing the world for the better, sometimes one person at a time. And sometimes, at great risk to his own personal wellbeing. He told me many times that his favorite thing to do was to give a speech. So today I am honored both to speak to you and to speak for him.”